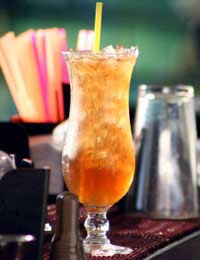 Recent research by an insurance company reveals that as many as four out of five Britons admit to being ‘very drunk’ while on holiday.

Over an average summer Bank Holiday weekend the average cost of binge drinking to the National Health Service is calculated to be around £25 million, with most of the costs being incurred in accident and emergency departments or in sending out ambulances to deal with people whose over-drinking has led to collapses or accidents.

A survey by the Department of Health suggested that the average holidaymaker expects to down around eight alcohol-based drinks a day, which adds up to 56 drinks over a week’s break or nearly 60 units of alcohol, massively in excess of the 21 units for men and 14 for women that is the recommended weekly intake. The survey found that on any given day, the British holidaymaker mixed their drinks too, with those who usually drank beer or wine admitting to consuming up to four cocktails or shots a day in addition to their usual tipples.

While many were aware that they drank more, very few understood that the consequences of drinking on holiday were both short-term: risk of injury or alcohol-related illnesses, and long term such as increased risk of heart, liver and pancreas damage in later life.

Insurance May Not Cover Holiday Binges

The same research also reveals that 70% of those taking out holiday insurance are not aware that their insurer will probably not pay if they have an accident or injury while drunk and on holiday.

There are two risks to excessive drinking while travelling:

Insurance companies say that the most common problems experienced by those who have been drinking on holiday, and for which they claim are:

If holiday insurance is invalidated, the cost to the holidaymaker can range from a few hundred pounds up to many thousands. While a new camera or telephone may only cost £250, treatment for alcohol related dehydration starts at £450 per day in Europe and may be much more in the USA, while a hospitalisation for a bone fracture will cost a minimum of £3,000 and could be as much as £25,000 in certain parts of the globe, depending on the severity of the injury.

It is recommended that people monitor the amount they drink on holiday, consume plenty of water to prevent dehydration and do not drive or operate machinery, including golf carts, mopeds and water craft, if they have had more than a couple of units of alcohol.