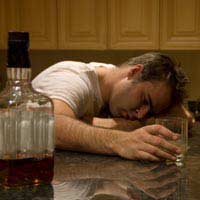 It’s not widely recognised that alcohol poisoning is a cause of serious illness and even death, every year in the UK. Even ‘hardened’ drinkers can be poisoned by alcohol and failure to recognise the symptoms can lead to permanent physical damage in the poisoned person or, in extreme cases, to death.

Alcohol Poisoning – How It Happens

Acute alcohol poisoning is nearly always the result of binge drinking, which is why any excessive drinker is at risk. The average human body processes about a unit of alcohol an hour, slightly less if you are female or underweight, and if you exceed this amount by a significant percentage, the blood alcohol concentration (BAC) becomes dangerously high – this is what we call alcohol poisoning. If your BAC becomes too high then your body actually starts to shut down functions, and in extreme cases you can stop breathing or your heart can stop beating. The most common cause of death in cases of alcohol poisoning is for people to choke to death on their own vomit – this happens because the gag reflex that usually prevents choking has been ‘switched off’ by the sedative effects of alcohol poisoning.

The three traditional treatments for drinking too much can actually cause more harm than good:

How To Recognise Alcohol Poisoning

It can be difficult to tell normal drunkenness from dangerous levels of intoxication and poisoning. Both will manifest themselves with confusion, poor coordination, pallor, vomiting, stupor (being conscious but not responding to sounds or being touched) but alcohol poisoning may also cause the sufferer to have seizures, irregular or slow breathing (less than eight breaths in a minute is cause for concern), a low body temperature and unconsciousness.

At this point the sufferer needs immediate hospital treatment.

Getting Help With Alcohol Poisoning

If somebody you know appears to have one or more signs of acute alcohol poisoning:

Once in hospital, people with alcohol poisoning may just be monitored until they are fit to go home, or they may have to have a breathing tube fitted, an intravenous drip to hydrate them, or a catheter. In extreme cases, their stomach may have to be pumped out.