Home > Alcoholism > Understanding that Alcoholism is a Disease, Not a Choice

Understanding that Alcoholism is a Disease, Not a Choice 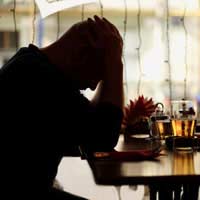 Alcoholism is very different from other drinking problems or alcohol abuse. It's a disease which completely takes over a person's life. It's not something the alcoholic chooses, and stopping is not a case of saying no. It's compulsive and progressive disease, and until the alcoholic admits the problem and quits drinking, it's unstoppable. The condition affects their physical and mental health, and causes problems at home, at work and with friends.

The term alcoholic is often used inaccurately, but the difference between someone who enjoys a few drinks and even sometimes a few too many, and the alcoholic, is clearly defined. It is not essentially just the person who had a heavy night and overdid things. It's a constant and overwhelming addiction.

Most of us at one time or another have thought how nice it would be to have a glass of wine, or a cool beer, but this is not what is meant by cravings. Craving, for the alcoholic, is a completely different matter. It's an overwhelming compulsion, a crushing need to consume alcohol that goes way beyond anything else, until the compulsion is satisfied and the alcoholic has a drink in their hands. They will move heaven and earth to get that drink, even stealing or lying to achieve it.

Lack of Control Over Drinking

Losing control in this sense doesn't mean getting so drunk you can't stand. It means being unable to stop drinking once its started. The alcoholic will find it almost impossible to enjoy normal, moderate drinking, and almost certainly be incapable of switching to drinking water or a soft drink when things start to get wobbly. They have no control over their alcoholic intake, and the main focus will be to keep drinking. Running out of alcohol is not an option, nor is stopping when there is drink to be drunk.

Just like a drug addict, the alcoholic's body will become dependent on their intake, and the alcoholic will need to keep those alcohol levels topped up - often just to feel normal every day. Withdrawal symptoms include nausea, sweating, paranoia, shakiness, and anxiety and in some cases seizures and hallucinations can happen. In the most extreme cases, full blown delirium tremens - DTs as they're commonly known - can occur and the alcoholic can be very ill indeed. Usually, milder symptoms happen every day upon waking, such as anxiety, vomiting, shakiness etc, and this is only relieved by drinking more alcohol or by taking soothing drugs such as beta blockers or valium.

As time goes by, the more alcohol you drink, the more you need to drink to get drunk. And aside from the physical dependence of drinking alcohol just to get through each day, the alcoholic is also seeking to get 'high'. As time goes by, more and more alcohol is needed to achieve that. The alcoholic is not fussy, and will drink whatever is around, whether it's fine wine or cheap cider.

So you can see that alcoholism is not a simple case of drinking too much, it's far more complex. It's more important to them than eating, and will be more important than children and family, work, friends or even the alcoholic's own health and well-being.

The alcoholic will often display many other drinking behavioural patterns, such as binge drinking, or using other drugs. But don't be confused; the alcoholic is at the mercy of a far greater drive to self-destruction.

It may seem like self-indulgence to everyone else, but the alcoholic needs treatment for this condition the same as any other disease.